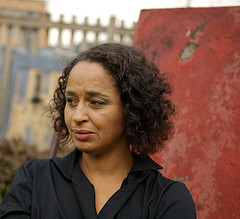 Phillippa Yaa de Villiers, born in Johannesburg in 1966, is a South African writer and performance artist. Her poetry has been widely published in collections and anthologies.

In 2006, the Centre for the Book published her first volume of poetry, Taller than Buildings. Her second collection, The Everyday Wife, was launched at the Harare International Festival of the Arts in April 2010. Phillippa has also toured with her autobiographical one-woman show Original Skin, and has performed her work in many countries around the world.

Phillippa is a multiple award winner, receiving, among others, the National Arts Festival/de Buren Writing Beyond the Fringe Prize (2009). In 2012 she received the Overseas Scholarship for studies in Creative Writing at Lancaster University, and in 2014 her commissioned poem was performed at Westminster Abbey as part of the Commonwealth Celebrations.

She has also written plays, including Where the Children Live (2005), and was editor for the anthology of African poetry No Serenity Here (2010).

Don’t miss this opportunity to interact with Phillippa Yaa de Villiers. There will be a short discussion session after the readings. Copies of books will be on sale.