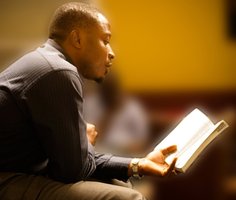 Eghosa Imasuen, a Nigerian novelist and short story writer, was born in 1976. His first novel, To Saint Patrick, an Alternate History murder mystery about Nigeria’s civil war, was published by Farafina in 2008. His second novel, Fine Boys, which chronicles the voices of Nigeria’s post-Biafra generation, was first published in 2011 as an eBook. The print edition was released in 2012.

An alumnus of its inaugural 2007 edition, he was a facilitator at the 2013 and 2014 editions of the Farafina Trust Adichie Creative Writing Workshop.

He is also a medical doctor - graduated from the University of Benin in 1999 - and lives in Lagos, Nigeria, with his wife and twin sons. He currently works as the chief operating officer at Kachifo Limited, publishers of the Farafina imprint of books.

Don't miss this opportunity to interact with Eghosa Imasuen. There will be a short discussion session after the readings. Copies of books will be on sale.